June 17, 2015 (Vancouver, BC) – Eli Bennett has been featured in the Province Newspaper promoting his 2015 Breakthrough Tour across Canada!

June 12, 2015 (Toronto, ON) – Eli Bennett has been featured alongside six legendary artists (Celine Peterson, Branford Marsalis, Freddy Cole, John Pizzarelli, Carmen Bradford, and Gerald Clayton) in The Toronto Star to promote the Toronto International Jazz Festival.  Eli Bennett performs at the Toronto Jazz Festival on June 25 at The Rex Hotel with his quartet as part of his 2015 Breakthrough Tour across Canada.

June 10, 2015 (Vancouver, BC) – Eli Bennett has been featured in Vancouver’s ‘The Georgia Straight’ newspaper promoting his 2015 Breakthrough Tour across Canada.  The newspaper is available at newsstands across the Lower Mainland and can also be viewed online below.

Eli Bennett has been nominated for the prestigious TD Grand Jazz Award and the Galaxie Rising Star Award from the Festival International de Jazz de Montréal!

As part of the #BreakthroughTour 2015, Eli Bennett will be performing at the Festival International de Jazz de Montréal with his quartet on Saturday, June 27th at the SCENE TD outdoor stage.  A full list of #BreakthroughTour dates can be found: HERE.

About the TD Grand Jazz Award:

Established in 1982, each year the Concours de Jazz (the TD Grand Jazz Award since 2010) honours the most popular Canadian jazz group among those registered in the Concours and presented as part of the outdoor program. In accordance with the competition rules, all artists and groups registered in it must present a repertoire composed mainly of original material. The competition brings to light a promising group each year, then helps that band launch a career by providing it with exposure in several important ways. Since 2001, the Galaxie Rising Star Award is also presented to the composer of the most original piece of music, selected among the competing groups.

For more information on the award nominations, please visit www.montrealjazzfest.com 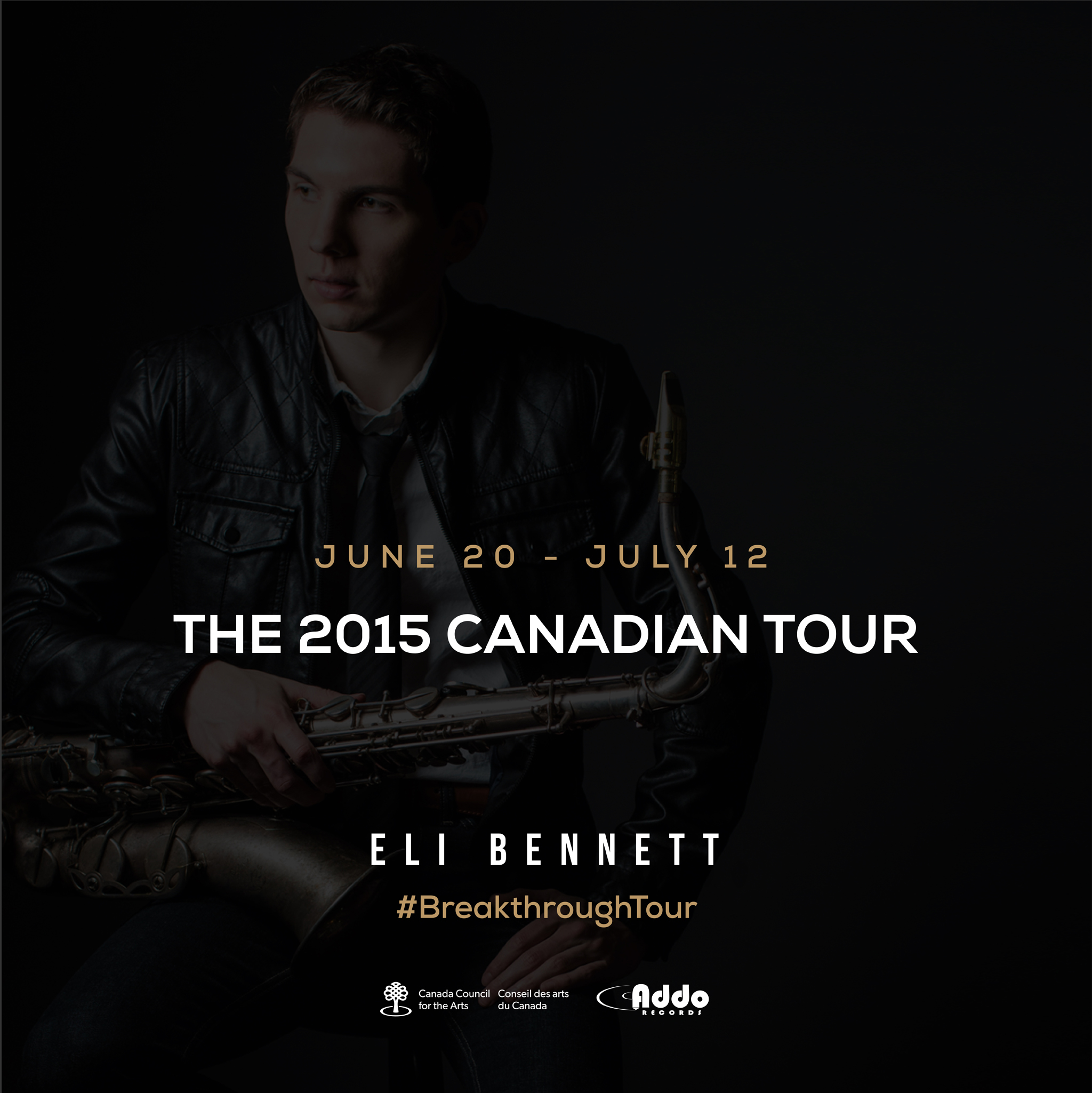 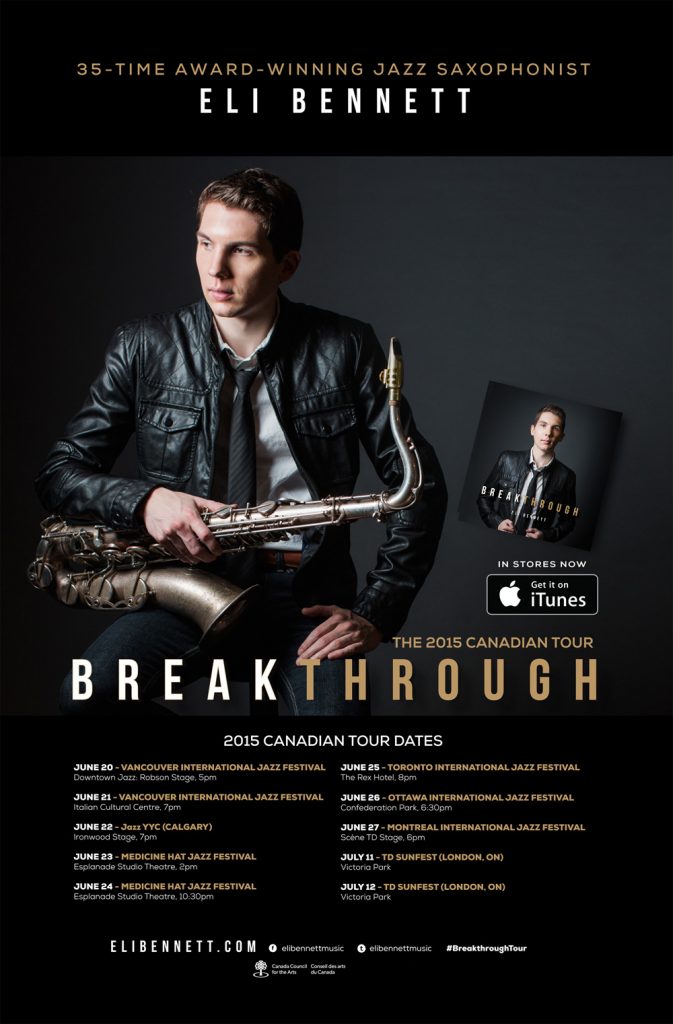 Since its release Breakthrough has received international attention, ranking #3 on the Canadian National Jazz Charts in December 2014, and #14 on the US CMJ National Jazz Charts, while being featured on the homepage of iTunes Canada Jazz for two months as one of the top Canadian jazz albums. It was also named the “#4 Best Jazz Debut Album” of 2014 by the Ottawa Citizen and received rave reviews from All About Jazz and WholeNote magazine in addition to receiving major radio play in North America and Europe. In 2015, Breakthrough won the Julian Jazz Award from BC’s CJSF 90.1FM for Best Canadian Jazz Album by an Emerging Artist as well as a 2015 Western Canadian Music Award Nomination for Jazz Album of the Year.

Thank you to the Canada Council for the Arts for making this tour possible.

Thank you to D’addario Canada, D’Addario Woodwinds, Selmer Paris and Applied Microphone Technology for their support. 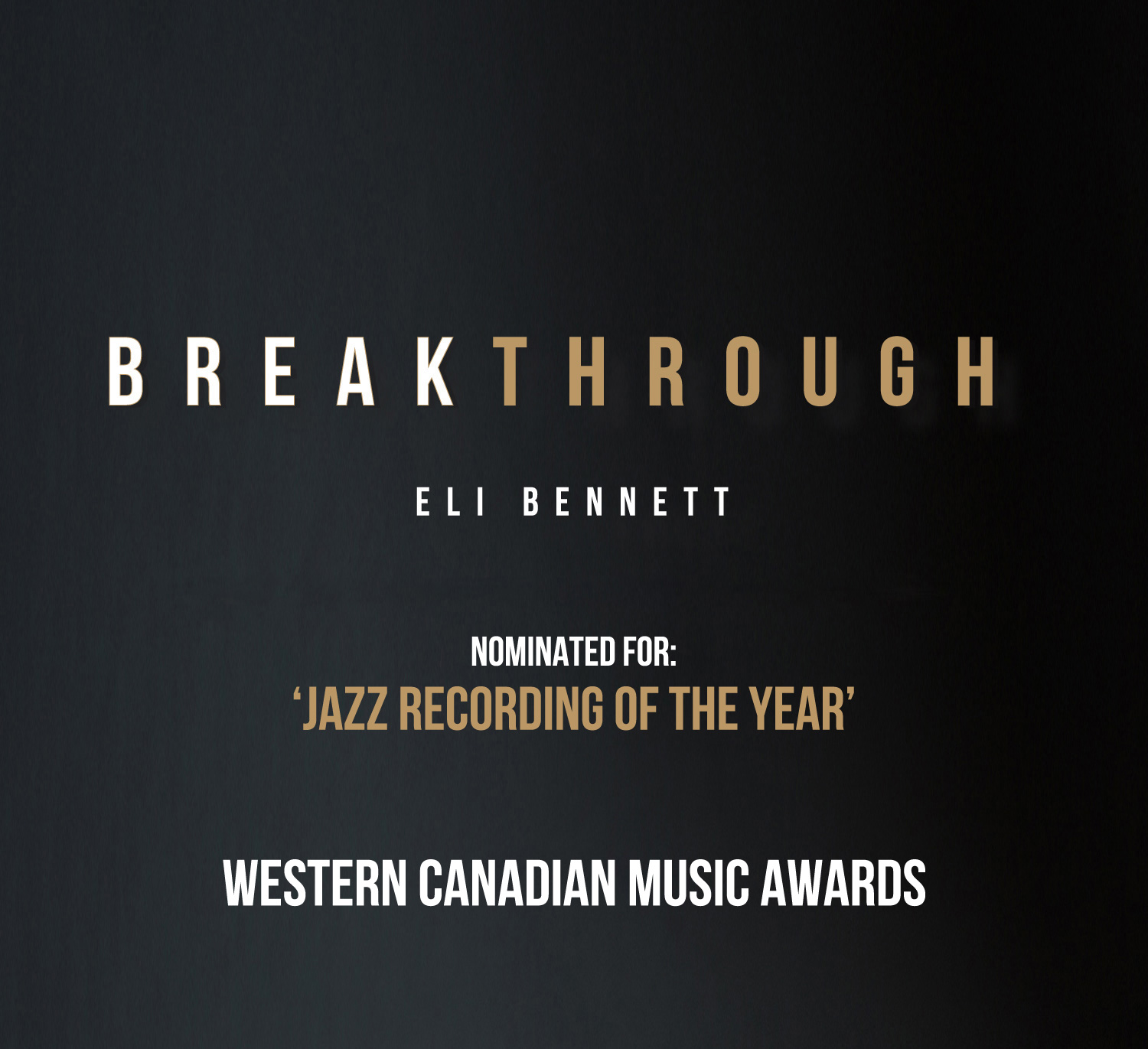 May 5, 2015 (CANADA) – Eli Bennett’s debut album “BREAKTHROUGH” has been nominated for a Western Canadian Music Award for ‘Jazz Recording of the Year’!

The 2015 WCMA Nominees for ‘Jazz Recording of the Year‘ Are:

For a complete list of WCMA 2015 Nominees, please visit: http://breakoutwest.ca/2015-wcma/wcma-nominees/ 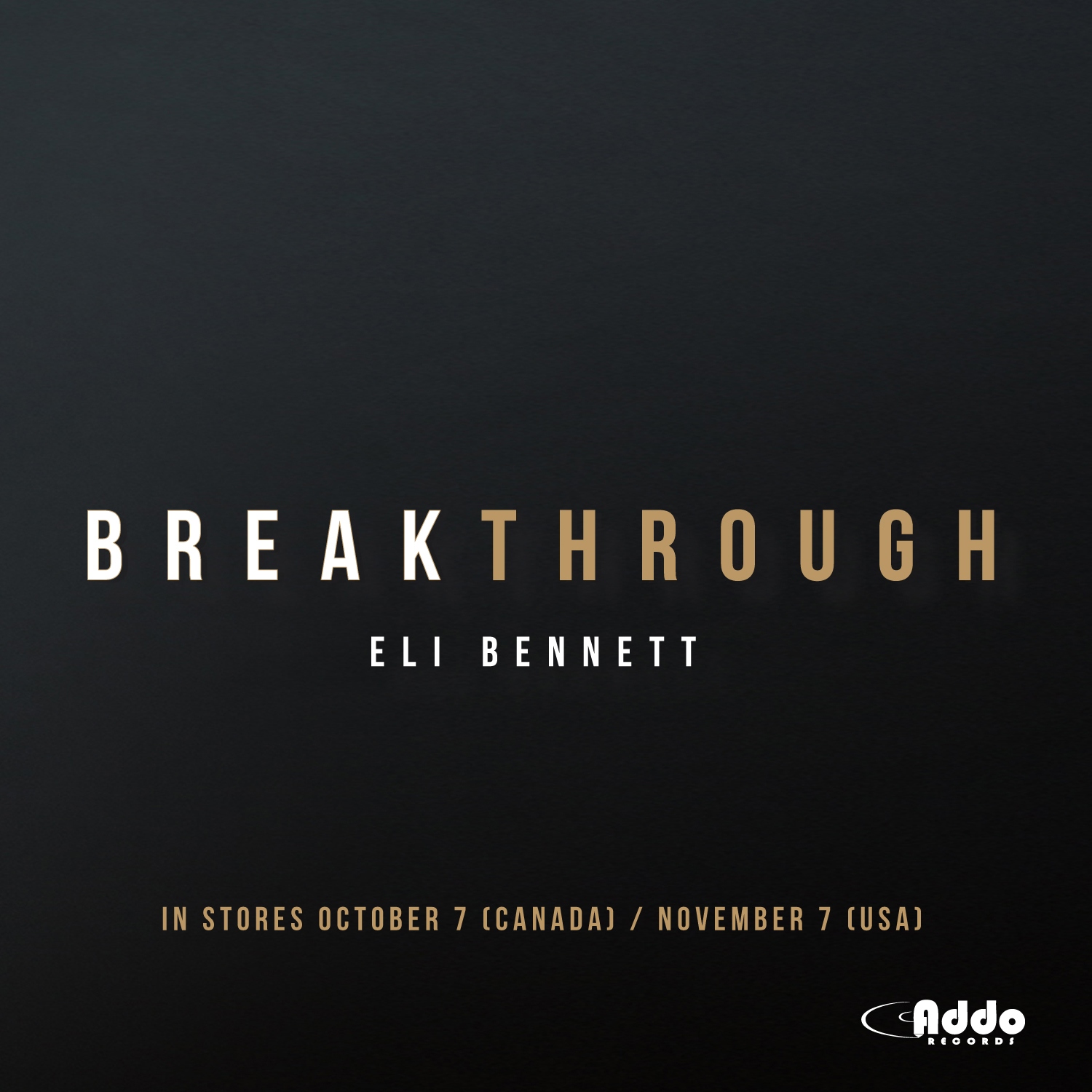 “Mr. Bennett “speaks” in an accessible tonal style, with a knack for simple beauty backed by colourful, flexible, open and populist musical arsenal punctuated with occasional outbursts of musical fireworks that reside somewhere between Sonny Rollins and Chris Potter.”

For the full review, please see the link below:

Media inquires may to be directed to management@elibennett.com 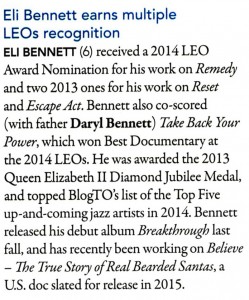 The world’s largest online jazz magazine, All About Jazz, has reviewed Eli Bennett’s debut album Breakthrough and has rated it 4/5-stars!  To read the review visit the link below: