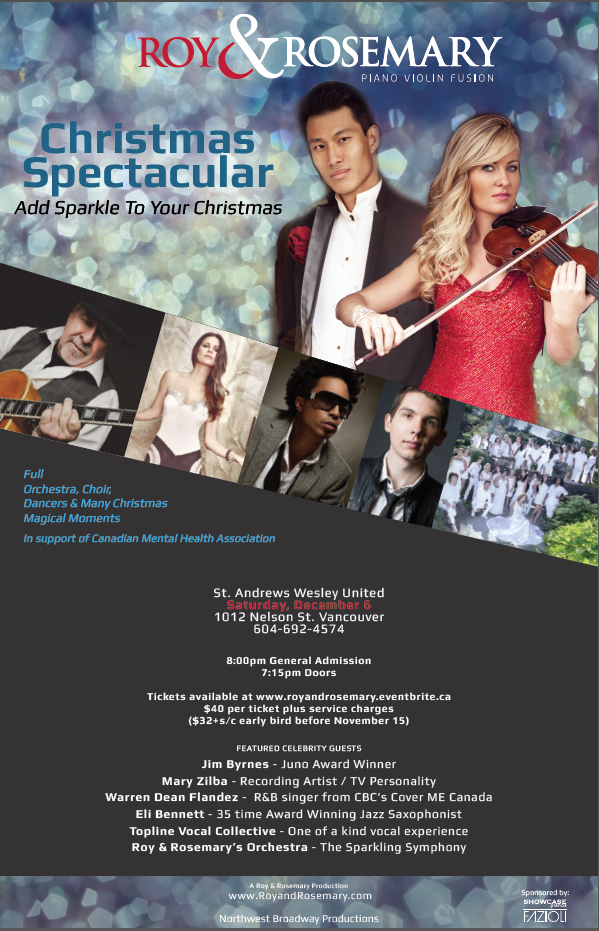 Known for their versatility, passion, musicianship, and style, pianist Roy Tan and violinist Rosemary Siemens met while accompanying the Canadian Tenors on tour and have since been capturing the hearts of audiences the world over.

Each equally comfortable with classical and pop music, their diverse talents and improvisational skills have led to countless performance opportunities, including three different performances at New York’s Carnegie Hall, one of which debuted a combined hip-hop and classical concert; a performance as the first ever instrumentalist at St. Peter’s Basilica at the Vatican; entertaining at numerous private events, including for Donald Trump at his Mar-A-Lago estate in Palm Beach; performing at the Egyptian Consulate in Washington DC, performing at two concerts at the Vancouver 2010 Winter Olympics; as well as the Beijing Summer Olympics, and even opening Hockey Night in Canada.

Roy and Rosemary form the instrumental side of their internationally acclaimed Pop-Opera powerhouse Destino, which is currently on tour throughout Canada and the United States. In November of 2012, the duo released their debut piano and violin fusion album “Once Upon a Dream“, featuring some original works along with many familiar and beloved tunes fully orchestrated and realized in a way that is traditional, yet fresh and exciting.

In addition to being adept at on-the-spot improvisations in various styles of music, the duo are blessed with the special talent of perfect pitch. This has been an incredible gift to both of them, further allowing them to be musically in sync with each other on and off stage.

A very unique part of their show is doing requests from the audience, often even learning and arranging unfamiliar tunes instantly, thus inviting the audience in to be a part of the show and a key ingredient in the creative process. Their talents do not end there however, they will keep you wanting more when you hear either or sometimes both of them taking up a microphone and serenading you with their voices.

They have appeared on “Entertainment Tonight,” “Canada AM,” “Breakfast Television,” “Urban Rush,” and on a live television broadcast in New York. Other notable performances include the Miss America Gala in Las Vegas and the 25th Anniversary of Children’s Miracle Network at Walt Disney World in Orlando, Florida.

Roy and Rosemary’s love for music has given them the privilege of performing throughout North America, China, Korea, Japan, Israel, Australia, New Zealand, and throughout continental Europe.